Nailing Video Game Script Writing – What You Need To Know 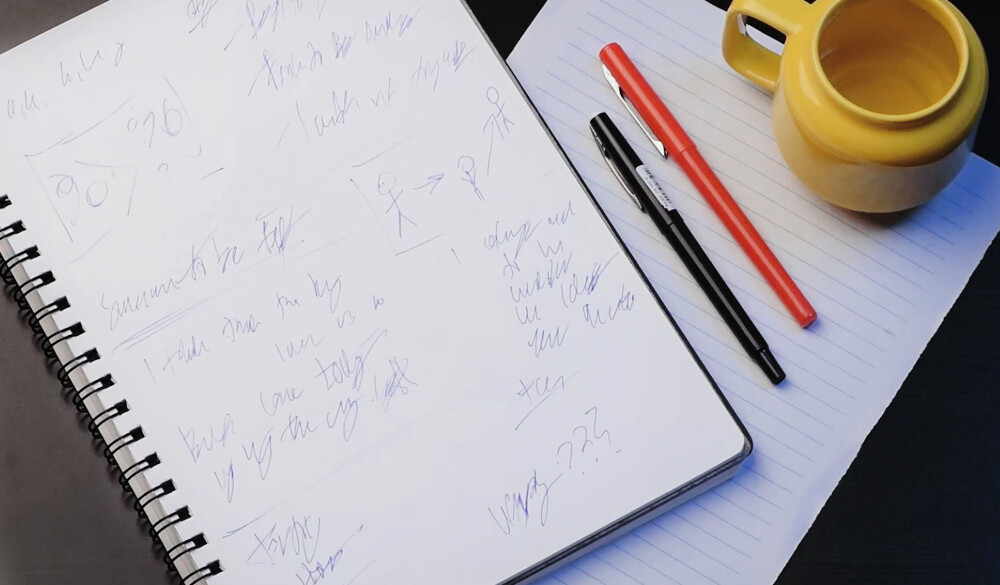 Most video games are full of words. But where do these words come from? They’re written by writers of course! Like any creative industry, writers are an essential part of video game design. However, video game script writing is distinct from that of films or stage productions for a number of key reasons…

This article gives you a rundown of what it means to write video games scripts, how you can build a career writing for games, and how to write a script that warps a player into the world you’ve created for them.

What is a video game script?

Broadly speaking, a script encompasses all of the written text relating to an entertainment production – plays, films, radio broadcasts, video games, and so on.

As shown in the table above, there are quite a few differences between traditional scripts and video game scripts. Video game designer Ian Bogost explains it best:

“…games abandon the dream of becoming narrative media and pursue the one they are already so good at: taking the tidy, ordinary world apart and putting it back together again in surprising, ghastly new ways.”

While traditional narratives do have a place in video gaming, the majority of stories told through video games involve what Bogost calls ‘procedural rhetoric’, a term he coined. This is the idea that a story can be told through the audience interacting with, and learning from, a new world of rules and processes.

Components of a video game script

Plot/narrative: Plumber saves mushroom princess from… a dinosaur? A dragon maybe? While Bogost firmly believes in a future where games present only the environment in which the player builds their own story, most games like to offer a bit more. (FYI Bowser is actually a ‘great demon king’).

Characters: Choose your fighter! Character descriptions and biographies occur in traditional scripts as well. A good character profile is helpful because it keeps all the information you have on a character in one place, creating a kind of handy reference sheet if you need to figure out how they might act in a situation or conversation. The MasterClass staff cover the basics of character profile creation.

Dialogue: “Hey, listen!” Game dialogue can be very different from a film, for example. This is because unless an actor is forgetting their lines or ad libbing, they are supposed to stick to the exact conversation outlined in the script. Even when actors are improvising, a conversation only ever happens once; with the exception of time travel. In video gaming however, decision trees, friendship meters, alignments, replayability, and more can turn one interaction into a multitude of possible routes. For more info, check out these game dialogue tips from the New York Film Academy.

Cutscenes: Skippable, if you’re lucky… Cutscenes are probably the closest you’ll get to traditional scripts during video game production. This makes sense, since cutscenes are usually short video sequences designed to provide exposition, as well as breaking up levels or sections within levels of a game. As writer/director Greg Buchanan explains in detail:

“It is therefore crucial… to be able to practice and excel at non-branching narrative.”

Other non-dialogue texts: Perhaps the archives are incomplete. As mentioned in the table above, there’s a wider range of texts in a game than in traditional media. While much of these texts are optional for the reader, they are important for fleshing out the world that’s being created and providing a richer experience for those interested few looking to immerse themselves deeper into your game. Examples include:

How to write a video game script

Outline your plot ⇌ design: The chicken-script or the game-design-egg? Whether story or design come first in gaming is a tricky question. It can be the case that you have a concept for a game and you then create a story in which to embed your game mechanics. Or for more narrative-based interactive story games you may want to outline a plot first and then decide how your story will literally ‘play out’. Have no idea where to even begin?! – Let writers.com get you going.

Preproduction: Where to start before starting. The preproduction stage is an important place to cement the idea for your game before spending any money. Part of that process is a prototype script which will give the gist of the story you’re planning to tell, before you spend time and money telling it in full.

Worldbuilding: It began with the forging of the Great Rings… Even a 2D platformer has a backdrop (Mario 3 was a play dontcha know?). When writing a game, you need a place for your game to take place, for the player to explore, and for your characters and events to exist and take place. MasterClass strikes again with their guide to starting worldbuilding.

Character design: Round 2, fight! As mentioned above in our ‘what is a video game script?’ section, character design and profiles help to envision and consolidate aspects of a character to help you decide how they would and should behave during your story. This includes heroes, villains, supporting characters etc.

Story flowchart: If ‘yes’, read on… Now you have the ‘where’ and the ‘who’, you need to figure out the ‘what’ and the ‘when’. This is going to be a meaty (or meat-substitute-y) task because you need to document what is going on at each stage of your story, across all possible story routes, and how the stages of your story flow into and out of one another.

The structure of each stage of a story flowchart will usually be:

At any step after 1., branching storylines can merge again. This happens very often during game scripts because otherwise you’d end up with an unmanageable number of unique storylines to write and create. See this handy guide from Game Developer.

Writing your narrative: Putting pen to paper code. Once the outline, design, world, characters, and structure are all in place, you’re free to enjoy writer’s block! Hopefully not, but it can be tough getting your full narrative written. ACMI have a great guide to the 4 main points of good video game narrative:

Fleshing things out: The lawful-evil devil’s in the details. Even when your main narrative is written, there will likely be plenty left to work on. Side quests, alongside the other non-dialogue texts listen in our ‘what is a video game script?’ section above, require lots of additional writing. As long as they’re consistent with your tone and don’t contradict your main narrative then it’s just a matter of getting them done (and a chance to show a little flair and imagination).

Reviewing: It was the ‘blurst’ of times?! While this is last on our list, since it’s the last thing you’ll be doing, it doesn’t mean you’re meant to leave it all until now. Like most things in life, iterating (doing something over and over, improving it each time) when writing game scripts is best. So, you should be reviewing your script continuously as you go through the design and production processes. Also, reviewing doesn’t just include fixing smelling mistakes or errors between grammar (although these things are important!), it’s also about improving the overall quality of your script by ensuring it has the right tone, is fit for purpose, and all ties together properly.

Personal preference: Can’t please everyone… Some love a detailed story, some see it as getting in the way of gameplay. Some love epic, large-scale conflict, some love personal journeys. It’s impossible to write a script to please everyone – so pick a story you want to tell and do that well.

The player-character dynamic: Do as I do, not as I wouldn’t do. Coming back to the interactive vs linear debate, when a player is able to make their character behave as they would, it helps immersion. But, giving a player complete control over a game inhibits the designer’s ability to tell a story (The Stanley Parable anyone?). Again there’s no perfect way to balance this dynamic, but it’s an important consideration as you write your script.

Helping the player explore the story: There’s no knowing where you might be swept off to. Regardless of how much control the player has over the story, it should still be presented in a way that allows them to engage with it and encourages them to explore at least ideas and emotions, if not also environments.

Above are links to fan wikis (and IGN) that contain transcriptions of video games known for exceptional storytelling and impressive scripting. While they aren’t full scripts in the way you’d expect to write one for your own game (mostly just dialogue with description/stage direction), they can give you a sense of what a successful script includes. We’ve excluded games with literary source materials, since they won’t be relevant if you’re looking to write a novel script of your own.

BunnyStudio also have a great article with example excerpts from successful video game scripts, and explanations of why they work so well.

How to become a video game scriptwriter

Here’s 6 steps for to building a career in video game writing:

What is ‘scripting’ in video games?

If you’ve made it down this far and you’re wondering how a masterfully crafted narrative helps people get headshots every time then you’ve probably realised video games script and scripting in video games aren’t particularly related.

Scripting means writing code that performs a function in a video game. More specifically, the term is used to refer to writing a script to help you perform better at a game (often meaning cheating at the game). It’s generally frowned upon and will typically result in a ban if used in online competitive games.